Naturally, when an incident like this takes place, everyone wants to know what caused the accident. Parents, the school, the bus company all want to know could this happen again with another school bus. An expert was engaged to determine the cause of the separation, but before we get into that we need to review how the rear axle is typically attached to the school bus. As you will see in Figure 1, there are two “U-bolts” on each end of the axle that attach the axle to the rear leaf springs. One U-bolt is forward of the axle and one is located behind the axle. The U-bolts are attached to both an upper and lower “plate” which assist in keeping the axle secured and aligned with the leaf springs. 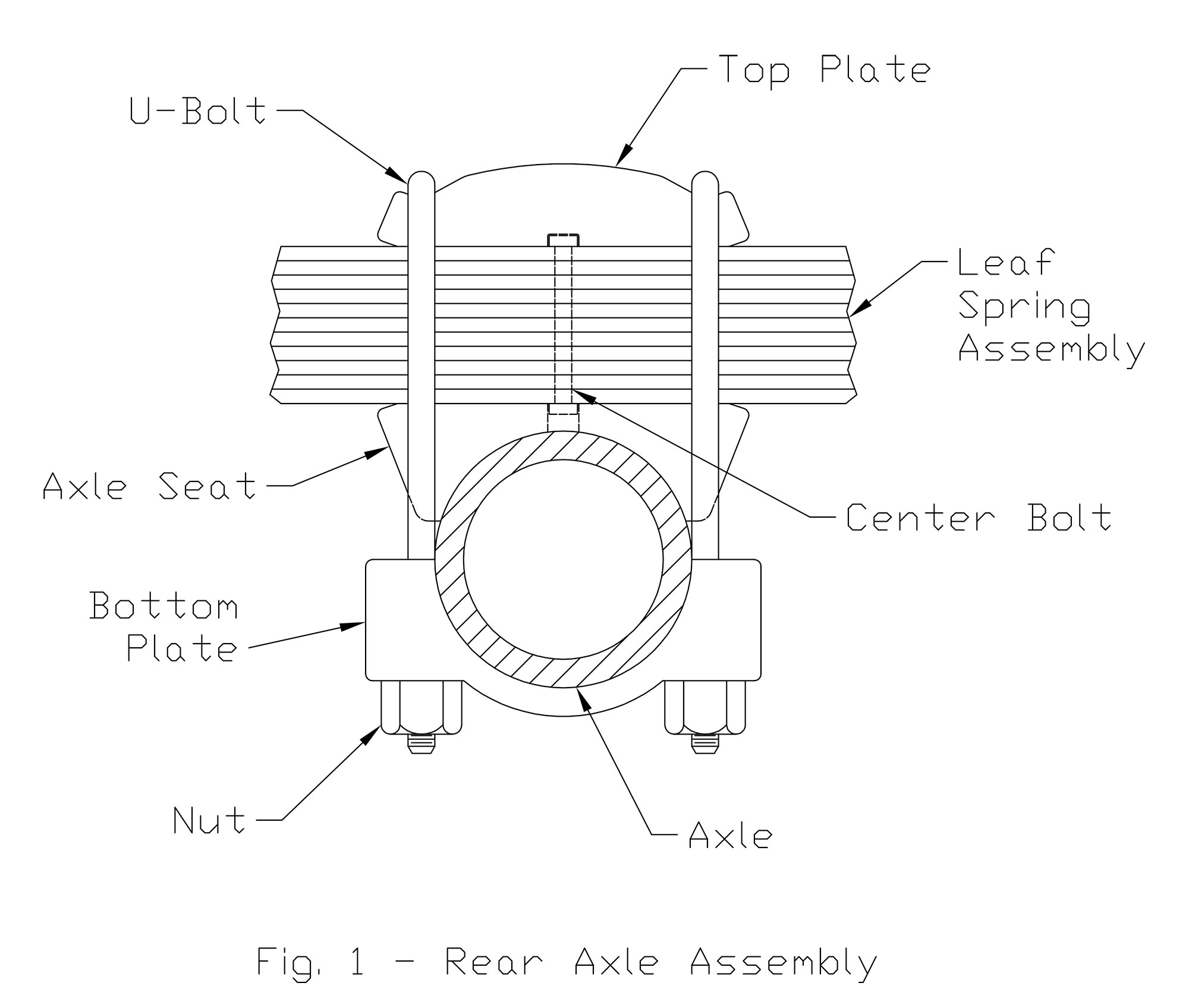 The initial expert determined that one leg of both front U-bolts, that is the U-bolts in front of the axle on both the driver’s and passenger’s side were fractured. The rear U-bolts on both sides of the vehicle were still attached to the leaf spring assembly but exhibited deformation and bending rearward as the axle separated from the leaf spring assemblies. To the initial expert this meant that both front U-bolts fractured at the same time. His opinion was that logically the only thing that could have caused both U-bolts to fracture at the same time was if the axle had struck some foreign object in the roadway. The problem is there was no evidence that the axle had impacted a foreign object. Likewise, the police report stated that there were no potholes or other objects in the roadway at the time of the accident.

EDT was asked to examine the available evidence and provide a second opinion. The bus had not yet been repaired so in addition to the bus, the rear axle, U-bolts, top and bottom plates, and rear shock absorber assemblies were made available for examination. The U-bolts were found to be asymmetrical. That is, one of the threaded legs was longer than the other for each of the four U-bolts. Cleaning of the U-bolt fracture surfaces revealed evidence of a pre-existing fatigue crack. Fatigue[1] is the phenomenon leading to fracture or cracking under repeated or fluctuating stresses having a maximum value less than the yield strength (for ductile materials) of the material. The observed fatigue crack had reduced the available bolt area by approximately 15% for each fractured U-bolt. At the time of the accident, normal operation of the bus in combination with the preexisting fatigue cracks exceeded the remaining strength of the U-bolts resulting in fracture of the U-bolts.

The subject bus was only a couple of years old at the time of the accident. So, the important question to ask is, why did a relatively new bus with a proven track record have fatigue cracks in its U-bolts. There must be more to the story… Well, there is, it turns out the bus was involved in a minor accident a year or so before the axle separation incident. The bus had been sideswiped by another vehicle near the rear axle. As part of the repair process, the bus was sent to an alignment shop to have the rear axle aligned. The alignment shop removed and replaced all four U-bolts.  The strength and diameter of the new U-bolts was checked by the initial expert and no issues were found.

However, upon examination of an exemplar bus, it was determined that the alignment shop had not reassembled the U-bolts and shock absorber assemblies correctly. The shock absorber mounting bracket was supposed to be secured to both the front and rear U-bolts (this is why one U-bolt leg is longer than the other). By inadvertently placing the long leg on the wrong side of the leaf spring assembly, it was impossible to attach the shock absorber mount to the rear U-bolt. This resulted in the shock absorber bracket being attached to only the front U-bolt. The alignment shop had assembled both ends of the axle in the same manner. As such, this incorrect assembly placed additional stresses on the front U-bolt every time the bus suspension moved resulting in the formation of fatigue cracks in the front U-bolt. Based on EDT’s investigation, it was determined that the axle separation was indeed an isolated incident attributable to the improper assembly of the rear axle U-bolts by the alignment shop.

Kyle T. Minden, P.E. is a consulting engineer with our Kansas City, MO office. Mr. Minden provides consulting services in the areas of design and performance of machinery and machine components, pressure vessels, fracture analysis, metallurgy, fire protection sprinkler systems, materials, and component testing, and infrared thermography... You may contact Kyle for your forensic engineering needs at kminden@edtkc.com or (913) 449-4953.

Learn about how EDT Forensic Engineering & Consulting approaches fire and explosion analysis, scope of damage, and forensic engineering by assigning a file today.