In forensic investigations, engineers may not always have access to all the information they desire. Consider a 70-year old building that was damaged, following a snowfall. In this scenario, the building is one of three attached structures with curved (barrel-style) roofs. For the purpose of illustration (or lack thereof), say the wreckage was removed from the site, prior to an engineer conducting a site visit but not before photographs were captured by others.

Engineers characterize such an accumulation of snow on this type of roof as unbalanced. It is well known that wind can move fallen snow. When snow is pushed from one side of a roof to another, an unbalanced load is formed on the roof.

To better understand the incident, it is desired to know if the roof was simply overloaded with snow or if other circumstances may have been at play. In the absence of a physical examination of the building or any construction drawings, an engineer is left with little tangible information with which to draw a conclusion. Nonetheless, a comparative analysis could yield insight about the incident.

In this example, an analysis could be conducted to compare the actual snow load to a long-standing code requirement for live load on the roof. The theory postulates that if the effects of the actual snow load were less than the code-required minimum live load, there must have been a defect among the structure. Wind is a recognized force that can act in concert with snow. However, for a barrel-shaped roof, wind generates a suction force on half of the roof, which would negate a portion of the snow load. Further, weather data indicated that the prevailing winds did not change direction for the immediate time period surrounding the incident.

olumn as an example of a point load (a concentrated weight over a small area). On the other hand, a distributed load represents a widespread load across a large area. Imagine snow blanketing a roof. Engineers symbolize distributed loads as repetitive point loads often shown as rectangles.

Think of a uniform depth of snow blanketing a roof. Now consider gusts of wind blowing across the snow and accumulating a pile on one side of the roof (an unbalanced snow load).  Engineers symbolize unbalanced snow as a triangle superimposed over a rectangle or, in certain situations, a larger rectangle.

Present-day building codes recognize a design standard known as ASCE 7 – Minimum Design Loads for Buildings and Other Structures. This standard is considered a modern benchmark for determining a variety of loads on structures, including unbalanced snow loads. Based on the procedures in ASCE 7, three snow load cases exist for the aforementioned building, which is adjacent to two other buildings. The snow load cases are depicted in Figure 4 and labeled “balanced/single barrel,” “unbalanced/single barrel,” and “unbalanced/multi-barrel.”  Based on the geometry of the roof, the magnitude of the unbalanced/multi-barrel distributed load is twice that of the balanced/single barrel. 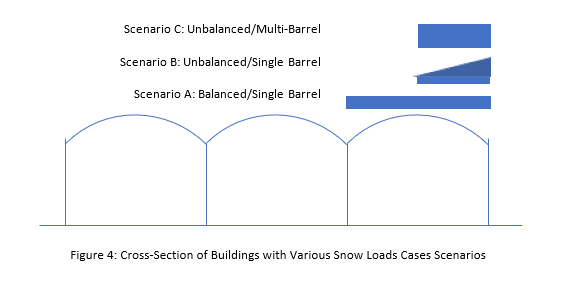 Based on the outcome of the analysis, it can be concluded that the snow load, alone, would not have damaged the building; a defect of some sort must have been present. Given the absence of details from the scene, a specific defect cannot be identified. Nonetheless, the theory is maintained that if the effects of the snow load were less than the effects of the code-required minimum live load, a defect must have been present among the structure.

Edward M. Deegan, Jr., M.S., P.E. is EDT's Mid-Atlantic District Engineering Manager and one of three Consulting Engineers in our Mid-Atlantic Office. Mr. Deegan provides specialized consultations in the areas of structures and the built environment, including cause of damage, scope of damage, and value of loss. You may contact him for your forensic engineering needs at emdeegan@edtengineers.com or (856) 662-0070.

Learn about how EDT Forensic Engineering & Consulting approaches damage assessment to commercial and industrial incidents and forensic engineering by assigning a file today.