In a prior blog post I introduced you to the basic steps involved in the manufacture of paper, from trees to paper using the Kraft Paper Process.  In this blog we will review an integral component in the Kraft Paper Process known as the Black Liquor Recovery Boiler.  To refresh your memory, the Kraft Paper Process involves “cooking” wood chips in a digester that is filled with a caustic based liquid, known as white liquor.  The digester discharges pulp and “black liquor”, which is recycled as shown in the sketch below:

The Black Liquor Recovery Boiler (BLRB) is an important piece of equipment within the Kraft Pulp Process.  The purpose of the BLRB is to “clean-up” the black liquor, permitting it to be reused, while generating useful energy.  The high organic content of the black liquor (from the wood) makes the black liquor a useful source of fuel for the BLRB.  The energy associated with burning of the black liquor results in the production of high pressure steam for other uses in the mill, including power generation in a steam-turbine generator.  In addition to the organic solids, the black liquor also contains sodium, the main ingredient in the white liquor.  Inside the BLRB, the organic material is burned, while the sodium compounds are left behind, forming a molten, glass-like material known as smelt, which is collected on a sloping floor at the bottom of the BLRB.  The smelt flowing from the BLRB is cooled and dissolved in water, producing the green liquor stream shown in the liquor life cycle sketch.

The BLRB is a large rectangular box with walls and a floor that are comprised of tubes (refer to the sketch of a BLRB below). 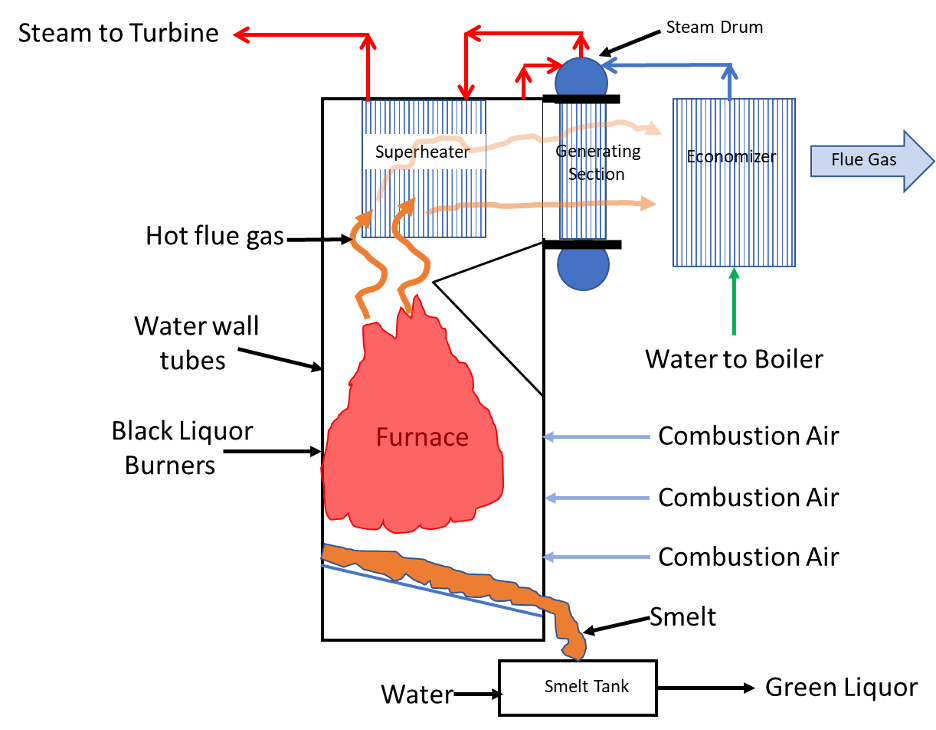 Combustion of the black liquor takes place at very high temperatures, over 2,000 F inside a portion of the BLRB known as the furnace.  In order to prevent the tubes from overheating, water flows through the tubes.  The heat from combustion of the black liquor results in boiling of the water in the tubes to steam, which is then collected at the top of the BLRB in a vessel known as steam drum.  Additional steam is produced in series of tubes known as a generating section, located near the top of the furnace.  The steam leaving the steam drum is heated further in groups of tubes known as superheaters, located near the top of the BLRB.  Flue gas leaving the generating section is further cooled in the economizer, where water supplied to the boiler is preheated.  The now cool flue gas leaves the BLRB and is routed to an electrostatic precipitator for particulate removal and then to a chimney.

Corrosion and Cracking in the BLRB

The molten smelt is very corrosive to the carbon steel tubes in modern high pressure BLRBs.  As such the carbon steel tubes in the floor of the BLRB and in the walls located in the lower portion of the furnace are clad with a corrosion resistant alloy such as stainless steel.  Tubes that are provided with an alloy cladding are known as composite tubes.  However, older BLRBs used a grade of stainless steel (known as 304L grade) that was susceptible to a form of corrosion known as stress corrosion cracking (SCC).  Stress corrosion cracking takes place in the presence of three conditions:  a susceptible material (304L grade), a tensile stress, and a corrosive environment.  The tensile stress is present due to differences in thermal expansion between the 304L grade stainless steel and the underlying carbon steel.  The corrosive environment results during shut down periods when water, used to clean the smelt from the floor of the boiler, combines with the sodium sulfide and sodium hydroxide compounds in the smelt.

The presence of the cracking is identified using non-destructive techniques, such as dye penetrant testing.  In most cases, the cracks are only in the clad portion of the tube and can be ground out and/or the weld repaired.  Repairs to cracks that extend through the cladding and into the carbon steel tube material require further evaluation.  In some situations, the cracks may be repaired by welding, while other situations may require replacement of the cracked portion of the tube.  Composite tubes clad with steels containing additional alloys such as chromium and nickel are used to combat SCC when existing 304L grade tubes are replaced or in the construction of newer BLRBs.

Another location prone to cracking is at ports used to route the combustion air into the furnace and the spouts used to discharge the smelt.  The cladding on the tubes around the ports and spouts experience cracking due to temperature fluctuations (also known as thermal fatigue) associated with the periodic removal of (cooler) frozen smelt and subsequent exposure to hot, molten smelt.  The cracking tends to be exacerbated by residual stresses present in the cold formed (bent) tubes that comprise the ports.  Unlike the composite tubes in the floor and walls, cracking experienced by the air ports and smelt spouts is known to propagate into the carbon steel tube material.  The cracking is detected by non-destructive inspection techniques such as dye penetrant testing.  The method used to repair the tubes is dependent upon the depth of cracks found.

BLRBs are also known to experience cracking on the inside of tubes (also known as the water side) at locations where the exterior of the tube is welded with a fixed attachment.  Over time, startups and shutdowns of the BLRB result in fracture of a corrosion resistant oxide coating on the inside of the tube, adjacent to the welded attachment.  When the boiler is shutdown, air entering the tube results in pitting corrosion at the fracture in the coating.  The use of boiler feedwater that contains high levels of dissolved oxygen will also result in pitting corrosion.  Additional cycling (startup and shutdown) over time manifests as cracks at the pitted locations, ultimately resulting in tube leaks.  Such a cracking mechanism is known as stress-assisted corrosion or SAC.  Mitigation of SAC is addressed by maintaining boiler feedwater with low concentrations of dissolved oxygen, and (in the case of new boiler designs) minimizing the number of attachments that are welded to the tubes.  Various non-destructive techniques are available to identify SAC, and most times tubes experiencing SAC must be replaced.

Cracking experienced by tubes inside a BLRB is reason for concern due to the potential for water leaks into the molten smelt present on the floor of the BLRB.  Water experiences very rapid vaporization to steam when it comes into contact with the hot smelt.  Because steam occupies a volume over 1,000 times greater than water, the result is sudden pressurization of the furnace.  Such a condition, known as a smelt-water explosion, can result in severe damage or sometimes complete destruction of the BLRB.  As such, mills take great efforts to inspect and identify the presence of cracks that may result in potential water leaks in the BLRB.

The corrosion and cracking discussed in this post are just a few corrosion mechanisms present in the BLRB, but represent the most significant with regard to safe operation of the BLRB.

Thomas D. Traubert, P.E. is EDT's Chief Engineer and consulting engineer with our Hartford, CT office. Mr. Traubert's assignments are primarily associated assignments in the chemical, refining, pulp and paper, power and steel industries. You may contact Tom for your forensic engineering needs at tdtraubert@edtengineers.com or (860) 285-8000.