Alternative Energy - Power from the Earth

In efforts to identify and use non-fossil (i.e., green) energy sources, a number of technologies have gained prominence in recent years. Vast arrays of solar panels and wind farms, consisting of a few to several hundred wind turbines, have become common across the landscape of the United States, and the world. Hydropower, the grandfather of green energy, has experienced a resurgence, where low head – high flow turbines are being installed at river locks originally used for navigation purposes. Older hydropower stations, some over 100 years old, have been retrofitted with updated controls and mechanical modifications to maximize efficiency and time on line. 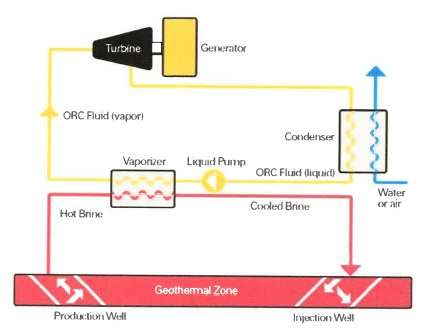 The vaporizer is a device commonly known as a heat exchanger, which is comprised of multiple tubes, placed inside a larger pressure vessel. The ORC fluid is a liquid refrigerant known as R134a, similar to the refrigerant used in air conditioning systems. The ORC fluid is first pressurized by the liquid pump, then routed to the pressure vessel side of the vaporizer. Inside the vaporizer, the ORC fluid flows around the outside of the tubes that contain the hot brine. The heat from the brine results in boiling (vaporization) of the ORC fluid, which then flows to the turbine.

In an ORC process, the turbine is known as a turbo-expander, and is the device used to extract energy from the hot, high pressure ORC vapor. The turbo-expander is similar to a fan, with blades attached to a shaft, which is attached to a generator. The hot ORC vapor entering the turbo-expander causes the blades and shaft to rotate, thus generating electricity in the generator. The ORC vapor exits the turbo-expander at a much lower pressure and temperature, then flows to the condenser. The condenser is comprised of air-cooled heat exchangers, each similar to an automotive radiator. As the ORC vapor flows through tubes in the condenser, fans blow ambient air across the outside of the tubes, thus resulting in condensation of the ORC to a liquid. The ORC liquid exits the condenser and flows to the liquid pump, where the process is repeated.

EDT was engaged to determine the reason that a number of the tubes inside the vaporizer had experienced leakage, after an unplanned shutdown of the facility. The leakage resulted in a loss of the ORC fluid into the brine system. At the time of the shutdown, the facility was experiencing sub-zero ambient temperatures for an extended period of time. An examination of tubes removed from the vaporizer indicated fractures associated with freezing of the brine inside the tubes.

Let’s Take a Look at the Operating Data

Detailed operating data was downloaded from the process control computer for the facility. The data revealed that the facility had been off-line for an extended time period during the cold ambient temperatures, due to issues related to restarting the turbo-expander. Furthermore, the control system had shutdown the flow of brine and ORC fluid to the vaporizer, as was normal practice. As such, the temperature of the condensed ORC liquid, trapped in the condenser and piping to the vaporizer, had dropped to the ambient temperature. When the facility was restarted, introduction of the now very cold (sub-zero) ORC liquid into the vaporizers took place. The incoming cold ORC liquid flowed against the exterior of tubes located near the ORC liquid inlet nozzle. As such, ice formed inside the tubes near the ORC inlet nozzle, resulting in bulging and/or leakage of the tubes.

The Solution for the Future

The original design of the facility had not anticipated prolonged outages during, atypical, sub-zero ambient conditions. However, changes were made to the control system to maintain hot brine flow through the vaporizer tubes, as well as to monitor the temperature of the ORC liquid during cold weather. Improvements to the turbo-expander controls were made to mitigate extended times associated with restarts during cold ambient temperatures.