The effects of hail on a metal roof panel are categorized into two groups:

The most common effect of hail is cosmetic indentations.

For roof coverings in general, one form of functional damage is a reduction in the long-term service life of the roof. As related to metal roof panels, functional damage is associated with compromising the factory-applied coating (or field-applied coating) that protects the metal from long-term corrosion. The following states the requirements for a metal roof panel to resist the effects of hail: “Metal panels shall show no evidence of puncture or chipping, peeling, blistering, cracking, or crazing of the coating when examined under 10X magnification.” Therefore, the first stage of assessing metal roof panels for hail damage is relatively easy. Examine the largest hail-caused dents you can find under magnification and look for evidence of compromised coating.

The second form of functional damage to metal roof panels is a reduction of water-shedding capability.

In essence, hail has caused the roof to leak. But other than the obvious and rare outright puncture through the metal, how can this happen? The greatest potential for this to occur is at the overlapping seams. For roof panels, some form of sealant is typically embedded within the side seams of the panels. As such, a hail-caused dent located at the seam has the potential to compromise the sealant and allow the roof to leak. It should be noted that dents at seams are less common given the hail resistance at the seams is doubled due to two layers of metal that are tightly situated.

So, you’re doing an assessment of metal roof panels and finding concentrated cosmetic dents throughout the pans and minor ribs of the panels. However, you’re also finding an occasional dent at a side seam.

Rather than summarily recommend complete roof replacement for the possibility of a roof leak, it is time to take the next step: a stringent water test. After finding side seam hail-caused dents at one of my recent examinations, I utilized the following process for water testing. The profile of the metal panel side seam was traced along the bottom of a plastic container. 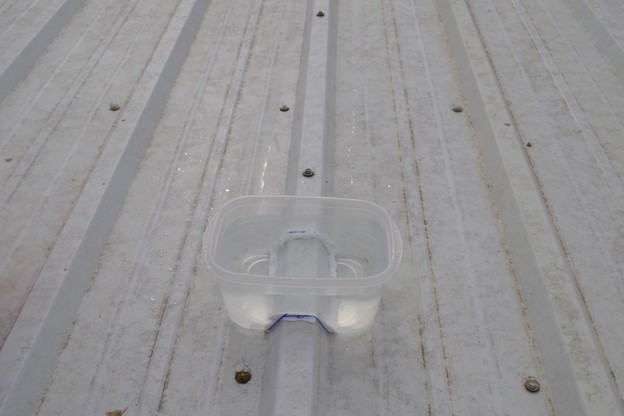 The process was repeated at multiple locations with no evidence of moisture intrusion. As such, it was concluded that the hail-caused dents in the metal roof panels, whether at the side seams, pans or minor ribs, had not caused functional damage to the metal roof panels on the roof.