Why Is My AC Leaking Water?

Why Is My AC Leaking Water?

As summer approaches, air conditioners around the country will start running over time. With that increased usage and warmer weather, instances of water damages related to the operation of “ACs” will increase. In this article, we will review two ways that water damages can occur from an AC.

Have you seen this before? Yellowish or brownish staining around air supply registers installed through the ceiling.

These stains are immediately recognizable by most as being caused by water, and often wrongly reported as water damage from a roof leak. While a roof leak above is possible, more often than not, that is not was is occurring to cause this unsightly condition.

To understand why this occurs, let us explore a common phenomenon that most are familiar with, but maybe do not fully understand, water condensation. Air, whether it be inside or outside of your home or office, contains a certain mass of gaseous water, referred to as water vapor or humidity. This water vapor is generally invisible, but not always, as is the case with clouds and fog. The maximum amount of water vapor that the air can hold is referred to as the saturation humidity or the point where the air can longer hold any additional water vapor without releasing it. Weather forecasts will report something called relative humidity, which is a ratio that compares how close the current air humidity is to 100% saturation.

You may be wondering why this is important for an AC system? In order to answer that question, we first have to understand the importance of dew point. Dew seen in the morning on grass and plants outside is water vapor that was formerly in the air, which has condensed into liquid water after the air has reached saturation. During a humid summer day, the warm daytime air can hold more water vapor than the cooler nighttime air. At some point, the nighttime air becomes cool enough that the 100% saturation temperature is reached, and water vapor “condenses” into liquid water we call dew. Water condensation is also what you often see on the outside of a glass containing a cold drink.

The same localized dew point conditions can occur in an attic space when the warm humid air inside comes into contact with cool surfaces of AC ducting or the supply register due to either leaks at duct joints or inadequate insulation. Water condensation forms and eventually can drip onto the top of the ceiling panel, creating the unsightly yellow or brownish staining that first alerts you that there is an issue. 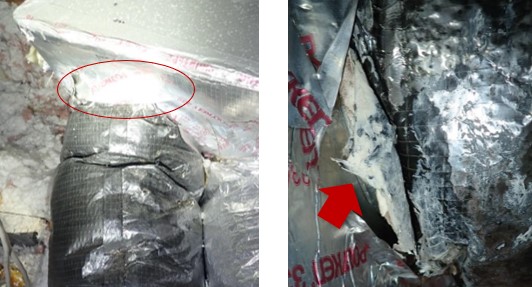 That is only one of two ways an AC can create water where you do not want it. In addition to giving us that most important cool air, an AC also functions to moderate the relative humidity of the air. Most people will feel comfortable when relative humidity is somewhere between 30% (dry feeling air) and 60% (moist feeling air). In a split system1, water vapor removal occurs on the evaporator coils inside of the air handler unit (AHU, or the inside part of the AC). Water condensation collects on the coils and drips into a drain pan. The pan is then drained through piping, the condensate drain, to the exterior.

Over time, the drain piping tends to collect debris and forms biological growth that can lead to blockages. When the blockage prevents the pan from draining, the pan can overflow and cause water damage to flooring and walls. A very simple device is commonly installed to prevent pan overflow. This device is called a float switch and it functions to automatically shut off the AHU when the pan becomes too full of water. 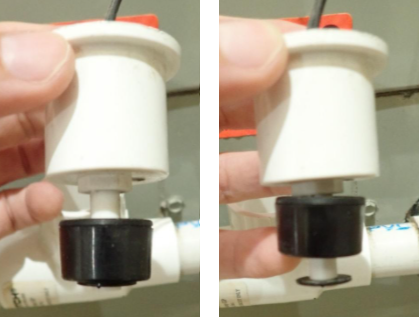 This stops the creation of more water condensation; however, the AC will no longer function until the drain line blockage is fixed. Although not common, a float switch can malfunction, or as you may find out on a scorching day one may never have been installed in the first place.

With regular maintenance of the AC ducting, insulation, condensate drain line, and float switch, these water problems can be mitigated.

Learn about how EDT Forensic Engineering & Consulting approaches scope of damage, and forensic engineering by assigning a file today.