Understanding the Importance of Steam Systems in our Hospitals

Steam is generated in boilers, typically located in a separate building known as a boiler house.  A normal boiler house is comprised of several boilers (for redundancy), a water supply, water treatment equipment, valves, and piping.  The boilers heat water, known as boiler water, to produce steam at approximately 100 pounds per square inch. The steam exits the boiler house and is distributed throughout the hospital by a network of pipes.

Steam is supplied to many different types of equipment, all having one thing in common: to use the heat contained in the steam to perform specific functions.  For example, water used for hand washing and bathing is known as domestic hot water. Domestic hot water is heated in devices consisting of a bunch of tubes or plates know as “heat exchangers.” In the heat exchangers, steam enters on one side of the tubes or plates with domestic water on the other side.  In a hospital, these two systems are separate and are not mixed.  Heat exchangers are used to remove the heat from the steam and transfer it to the domestic water.  Steam that enters the heat exchanger as a gas exits as liquid condensate.  Efficient steam systems collect as much condensate as possible, sending it back to the boilers as boiler water to be used again and again. 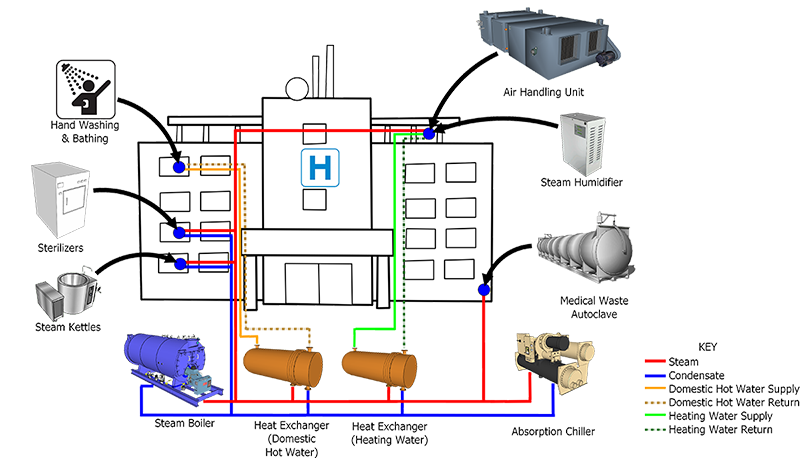 Figure 01. A hospital steam system schematic: the red lines represent the distribution piping connecting the boilers to the various pieces of equipment.

Some uses of steam in a hospital include the following:

Care and keeping of Steam Systems

Whether in a hospital or elsewhere, steam systems require regular maintenance. The number one factor that receives the most attention is the quality of the recycled water. With the exception of distilled water, most water contains an assortment of calcium, magnesium, iron, copper, and silica. These minerals are commonly associated with water hardness. Due to steam system temperatures and repeated steam-to-condensate-to-boiler water usage, these minerals tend to accumulate into a coating known as scale. Scale has two major drawbacks. First, scale reduces heat transfer, sometimes even by a factor of ten.  A layer of scale as little as a 1/16” thick has been shown to reduce the overall efficiency of a boiler by 11%. A buildup of scale also reduces effective internal pipe diameters and thereby restricts flow, resulting in additional performance degradation. A lot of money and effort is involved in monitoring and controlling boiler water quality.

A second major drawback due to scale is corrosion of steam system components, once again a factor to be considered in addressing boiler water quality. The corrosiveness of water is determined not only by the minerals present, but also the presence of dissolved oxygen and carbon dioxide. Untreated, the steam and condensate-boiler water flowing through the system can be expected to result in corrosion problems such as thinning of material, formation of cracks, and pitting. Corrosion byproducts themselves also lead to even further water contamination.

Reliable steam system operation is a combination of proper system design, a robust boiler water treatment and monitoring program, and regular maintenance. Although important in any steam system, attention to system operation is even more important in a hospital and should be designed to deliver the required performance. Like a three-legged stool, it takes all three “legs”—system design, water treatment and regular maintenance—for a steam system to deliver stable performance.

So the next time you visit a hospital and use hot water to wash your hands, know that steam is hard at work helping to keep you, the patients, and the hospital staff safe and comfortable.